Are Those Jobs Coming Back?

Recent discussions about bringing jobs back to America has me thinking a sad thought: Is it possible that these jobs are gone forever?

Productivity is essentially a measure of output/input and is usually measured as the (value of output)/ (cost of labor).  Any business owner recognizes the importance of increasing that number.  Looking at the chart below, you can see the DOL has recorded steady increases since WWII. 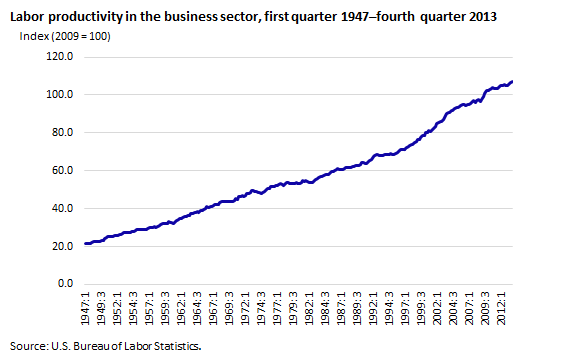 The question is: How have we gotten here?  Is it possible that you are working 5 times as hard as your grandfather?  I don’t think so!  Are you working 5 times smarter?  I find it doubtful if working smarter could account for this much increase.  My grandfather was a pretty smart guy.  So, there must be another reason!

Here’s where we’re running into a problem.  As the chart below shows, between 2009 and 2016, US manufacturing output was up over 20% while hiring only increased 6%.  How can this be?  I see several reasons: Increased utilization of robotics or automation, better equipment, and the fact that these factories just learned how to get by with fewer employees. The reality is that we’ve lost more jobs to machines than either Mexicans or Chinese. 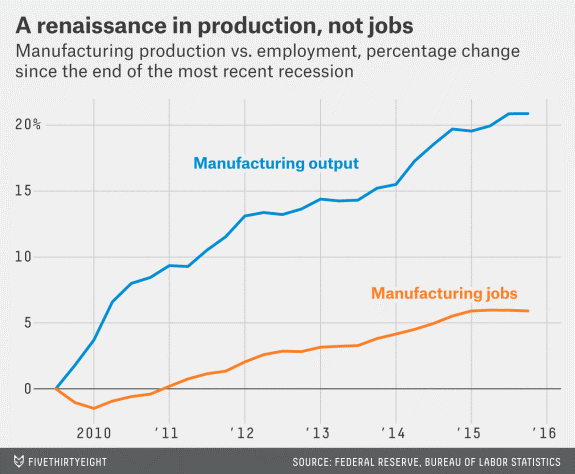 The truth is that there just isn’t anything to do about the changing tide in employment.  We’ve all know that 30 years and a gold watch at retirement went away with traditional pensions.  Populist politicians will not change the tide.  Those jobs are gone dow the same path as the horse and wagon.  People do not pick cotton by hand anymore.  Nor do we use two men, cross-cut saws to cut down trees (if I can help it).  It is neither bad nor good.  It just IS!

If you might think that we’re the only ones suffering, last year, I read about a Chinese manufacturer (for Apple) eliminating 60k jobs to automation.  The logic for any company is obvious.  A 2015 report by Boston Consulting Group (How Robots with Redefine Competitiveness) showed how a spot-welding robot’s cost had dropped from about $182k to about $133k with performance increasing at 5%/year.  The robot costs about $8/hr to operate as compared to a human at $25.  By 2025, they expect the cost to be in the $2 range.

An Associated Press News article reported that estimates show American has shed 7.5M manufacturing jobs since the peak in 1979.  At the same time, factory production has more than doubled.  At the same time, Ball State University’s Center for Business and Economic Research found that trade accounted for 13% of lost factory jobs.  Their research estimates 88% of manufacturing jobs lost were taken by robots and other internal factors. (AP 2016)

The big question isn’t how to get a job to come back that is no longer a job.  We have to move beyond that sort of populist, Luddite thinking and join the future. History is full of examples of businesses and jobs that went away.  If this were 1880, it is likely that you’d know one or more blacksmiths or coopers. Do you know even one?  I bet that you had to look up what a cooper did for a living.

The question should be, “What are the jobs of the future?”  And, “How do I best position myself and my children for future jobs?”