Last weekend was a wonderful time for a May outing in Central Arizona.  Typically, we would be expecting 100◦ + days in early May.  Just warm enough to make one uncomfortable on a long outing.  Saturday was a beautiful day on Perry Mesa starting in the low 50’s and reaching the 70’s.

Susan and I love to explore Arizona.  It has remarkable diversity and beauty.  Often, we go with friends.  This time it was just us. 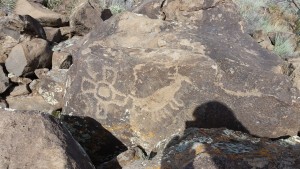 Perry Mesa rests just East of Sunset Point (Black Mesa) along I-17 and is largely a part of Agua Fria National Monument.  From the Interstate, it looks desolate and foreboding.  In reality, it is ripe with ancient culture and wildlife.  Tens of thousands of Hohokam Indians inhabited that prairie, mountains and canyons. Hundreds of miners, ranchers and pioneers traveled the dusty roads, living and dying in the area.  Evidence is everywhere. If you know where to look. 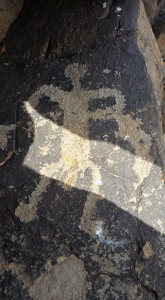 Most of the following pictures were taken in and around the Brooklyn Mine in Brooklyn Basin.  The mine operated sporadically from 1907 to 1970.  The mine was established for copper, but gold and silver usually occur in the same areas.  (Note the turquoise in the stone hearth.) The mine was also subject to one of the early mining scams in Arizona.  One of the owners went to New York to raise significant funds from shareholders.  I read the incorporation document and it was somewhat entertaining for someone with a geology background who is intimately familiar with Arizona.

This area also has some extremely good petroglyphs.  We took pictures of some of the more interesting ones.  There are literally hundreds more.  I doubt you can walk a canyon wall in the area without encountering this Stone Age art.  In fact, I’ve encountered petroglyphs in most parts of the state.  Some are obvious, others are not.  Why don’t you see if you can figure out what the artist was trying to say?

Richard Oxford is an avid outdoorsman who loves to hike and camp in Arizona. He is also a master barbecue chef. Rick is an Investment Advisor Representative with Richard Oxford Financial, and affiliated with Sowell Management Services. He is also a Certified College Advisor, with College Funding Solutions. His offices are in Scottsdale, Arizona. He may be reached at rick@richardoxford.com, or 602-697-7657.

In a recent presentation at the Phoenix Business Journal’s “Global Market Series” on trade opportunities with Mexico, Carlos Slim Helu said that the world economy has changed dramatically just within the past decade.

It used to be that people in the United States would retire around the age of 55. He says that people are living much longer, and that many American workers are doing service based jobs. This means that workers working in knowledge based industries should be able to work fewer days each week, for more hours a day, and work well into their 70’s and beyond.

Is it too late to qualify for merit based aid for college? The short answer is “it depends.”

In this interview on 550-AM KFYI, Richard Oxford talks about the many misconceptions regarding college financial aid. The biggest one is “I make too much money to qualify for aid.”

If you listen to this interview Richard Oxford explains the different types of aid and scholarship opportunities with colleges and universities. He also talks about how filling out the FAFSA form early can help you get in the front of the line, for the greatest financial aid breaks. If you are a family with a household income of more than $100,000 you may be interested to hear of the financial incentives available from colleges.

Richard Oxford is the head of Richard Oxford Financial, in Scottsdale, Arizona, and is a Certified College Advisor, with College Funding Solutions. For more information listen to the podcast, go online at www.richardoxfordfinancial.com, or call 602-697-7657.